(McClellan Park) “It will get colder in the end”: President Donald Trump swept aside worries about global warming in one sentence on a visit to California, like the entire west coast of the States – United with deadly fires of historic proportions, aggravated by chronic drought.

The dozens of blazes that have been devastating the coast for days have already done at least 27 dead since the beginning of the summer, including 16 just this week in the three states of Washington, Oregon and California.

“It will eventually cool,” assured the US president during an exchange with Wade Crowfoot, a local official with the California natural resources protection agency.

“The observed evidence speaks for itself: climate change is real and it worsens” fires, insisted Gavin Newsom, Democratic Governor of California.

The US president made a brief trip to Sacramento, the state capital, on Monday to find out about the situation before leaving to campaign in Arizona.

Democratic candidate Joe Biden at the same time lashed out against his rival, accusing him of denying the reality of climate change.

“If we give a climate arsonist four more years in the White House, how could we be surprised that America is set on fire even more? The former vice president said from Delaware, where he lives.

“We have a choice, we can commit to moving forward together, because we know that climate change is an existential challenge that will determine the future of our country”, or “we can choose the path of Donald Trump : ignore the facts, deny the reality, which amounts to giving up completely ”, he declared.

For Donald Trump, the cause of the fires is above all linked to an alleged bad “forest management” in these states, controlled by his democratic opponents.

According to scientific consensus, the exceptional scale of these forest fires is, however, well linked to climate change, which aggravates chronic drought and causes extreme weather conditions.

In California, the results for the week went up to 15 victims, including 11 in the county of Butte alone, still traumatized by the memory of the fires of November 924 which had reduced the city to ashes from Paradise.

Eight people had already been killed in fires in August in the state.

The governor of Washington state, where a baby was burnt to the ground last week, refuted Mr. Trump’s “false” claims in an open letter. “Your refusal to respond to climate change – and the steps you have taken to allow even more carbon pollution – will accelerate devastating fires like the ones you see today,” Democrat Jay Inslee insisted. 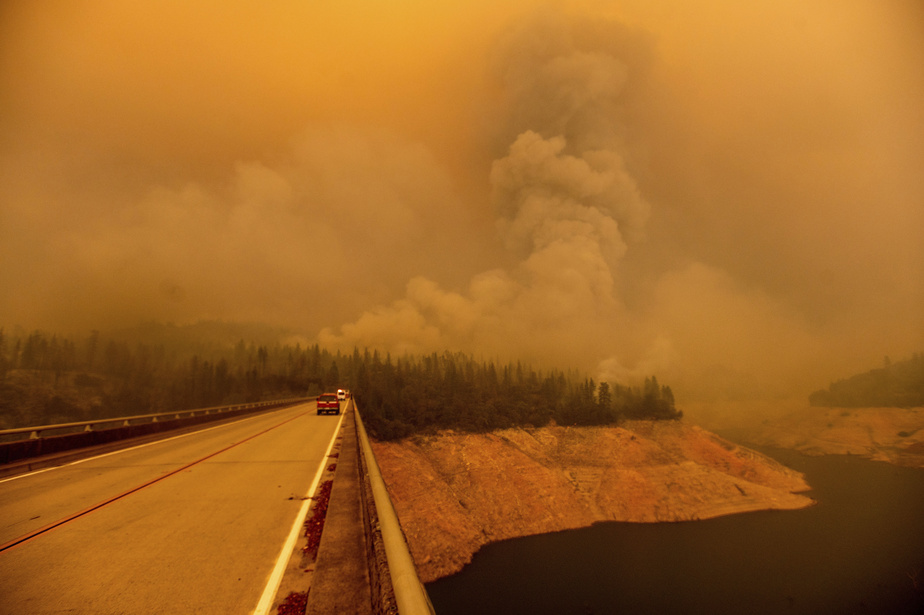 The acrid fumes given off by the flames affect huge areas. The cities of Portland, Seattle and San Francisco were among the most polluted in the world on Monday, according to the IQAir company ranking.

Ten deaths have been recorded in Oregon.

In Mehama, east of the state capital, Salem, police checkpoints limited access to the towns of Mill City and Lyons, evacuated in the face of the advancing Beachie Creek fire. Long lines of cars waited in the thick fog, with many farmers eager to return to feed their animals.

“We went back to Mill City this morning, but the police had advised us not to do it, because it is dangerous”, explained to AFP Elaina Early, a resident of this small town crossed by flames. “The house is standing, but we are leaving now because the conditions are really not good. “

More than 400 000 0 hectares went to ashes in Oregon, double what normally burns there every year, Governor Kate Brown noted on CBS Sunday. About 500 000 0 inhabitants are subject to a more or less high level of evacuation order, and 40 00 0 people have effectively left their accommodation.

“This should make us all aware that we must do everything in our power to fight against climate change”, she declared.

The fires have already consumed more than two million hectares on the west coast, while the fire season does not theoretically end until November.

Norway: reopening of schools Monday and bars on June 1