(Miami) Isaias dumped torrential rains over the Bahamas on Saturday and was heading as a tropical storm to the coasts of Florida, where it is expected to return again a hurricane on Sunday and test the emergency services of this state, already one of the most affected by the COVID epidemic – 18 in the USA.

Isaias , which was downgraded from Category 1 hurricane to tropical storm on Saturday night, was blowing at 17 h maximum winds up to 110 km / h and emerged over the Straits of Florida between the Archipelago of the Keys and Cuba.

The Miami-based National Hurricane Center (NHC) said the storm would amplify and revert to a hurricane overnight as it approached Southeast Florida before advancing toward the coast east of the peninsula.

The region was already enduring gusts of rain on Saturday afternoon.

“We will start to see the impacts of the storm tonight, then obviously tomorrow until tomorrow night,” Florida Governor Ron DeSantis said Saturday night. Palm Beach County has issued a voluntary evacuation notice, he said.

According to the NHC, “although Isaias weakened after his visit to Andros Island (in the Bahamas), he should strengthen on Saturday night and Sunday morning when the cyclone moves over the warm waters of the Strait of Florida and the Gulf Stream ”.

“ Isaias is expected to remain a hurricane through Monday, followed by gradual weakening Monday night or Tuesday,” the organization added. 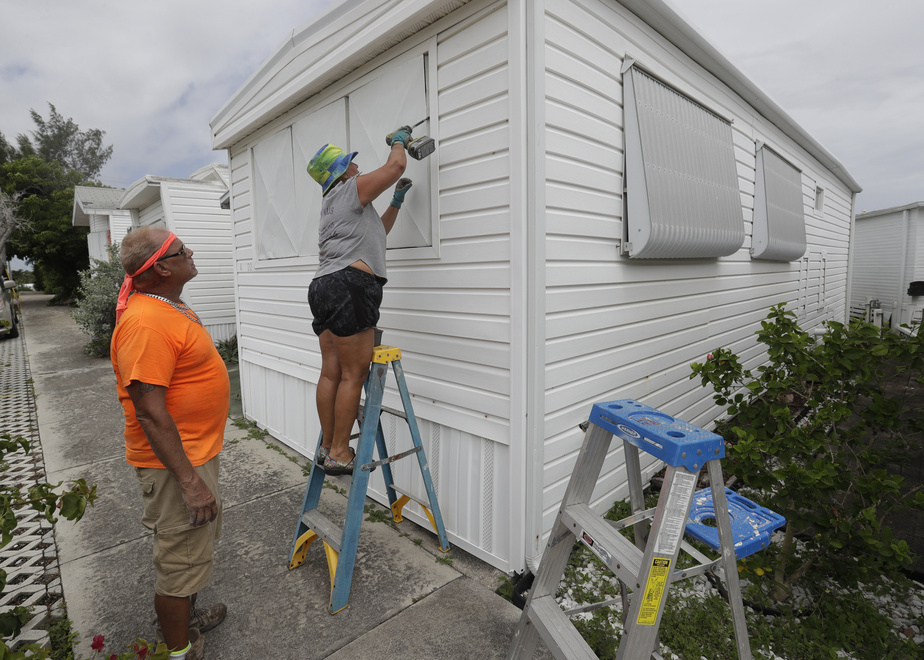 NASA for its part was following the storm very carefully, which risked disrupting the return to Earth of SpaceX’s manned capsule, after two months on the International Space Station (ISS).

Crew Dragon is supposed to bring back two astronauts Sunday afternoon for a water landing off Florida in the Gulf of Mexico weather permitting.

AT 19 h 34, the capsule started the process to leave the ISS and land on Sunday in the Gulf of Mexico near 17 h 41 GMT, according to the US space agency.

A site off the city of Pensacola (in northern Florida) has been selected as a “priority” for water landing, with an alternative in front of Panama City, if the sea is too rough or too strong winds.

Roads submerged by mud, high voltage lines torn off, decapitated trees and vegetation, flooded houses… Isaias has already done a lot of damage in Puerto Rico since Thursday , American territory, in the Dominican Republic without counting the Bahamas.

The Republican Governor of Florida on Friday declared a state of emergency for counties on the state’s east coast, from Miami-Dade to Nassau, which was approved by President Donald Trump on Saturday, allowing the granting of funds. “It will help our state respond quickly to any damage,” Mr. DeSantis tweeted.

The passage of the hurricane over Florida comes as this state in the southeast of the United States is already grappling with a sharp upsurge in the coronavirus epidemic.

“The Covid is serious. A hurricane is serious. If you combine them, the result is worse than the sum of the two […] This will have a multiplier effect, not cumulative, “said the former head of emergency management services in this state, Bryan Koon, in April.

Florida lamented Saturday 179 deaths linked to the new coronavirus in one day, a slightly lower toll, after the records of the previous days (253 dead Friday, 253 dead Thursday, 216 Wednesday, 186 Tuesday).

It also has more than 429 01 cases detected since the start of the pandemic, overtaking New York, long the epicenter of the American epidemic in the spring, and second behind California, whose population is twice as large.

Due to the weather, the state had to close COVID testing centers – 18, very often in tents, in anticipation of the arrival of the hurricane, even if the counties detection centers remain open.

No sign that coronavirus is seasonal, according to WHO

CDMX, Jalisco and Edomex concentrate the highest number of coronavirus cases in Mexico