(Paris) Western Europe is suffocating on Friday in intense heat, with temperatures exceeding 39 ° C in places, prompting the authorities to remind those who flock to the beaches or abandon the mask of the persistence of the coronavirus epidemic.

In France, the risk of heat waves or thunderstorms are reported in a third of metropolitan departments. The temperature rose locally to 40 ° and 40 ° C in the shade in the Paris region, in the center and part of the North-East of the country.

“Respect for barrier gestures, in particular physical distancing and wearing a mask when this is not possible, must continue” even if the temperatures rise, underlined the Directorate General of Health (DGS ) which also calls for special attention to the elderly.

Establishments housing the elderly are on alert, having to reconcile prevention measures related to the heat wave and those related to COVID – 14 for this particularly fragile category of the population.

In the Paris region, the authorities restricted car traffic to avoid a peak in pollution on Friday, the day of departure for millions of holidaymakers in August.

In Italy, 12 major cities have been placed at the highest level of heat-related danger for the most vulnerable (sick, elderly, etc.). Besides the capital Rome (37 ° C), Bologna (39 ° C), Florence (38 ° C), but also Perugia, Turin or Verona, all in the north of the country.

Despite the strong heat, the Romans seemed disciplined and most did not take off their masks, even in the street.

“Even if it is stiflingly hot, it is better to endure 37 ° C than catching the coronavirus ”, philosopher Daniela Iannelli, 41, local official.

For Adriana Poli, 64 years old, retired from Bergamo, a city in northern Italy most bereaved by COVID – 19, “we must ‘adapt to heat’. “Coming from Bergamo, we know what it is. The mask is a great help even if it can be tedious to wear it. The mask is better than the dead, ”she explains.

Hottest day of the year 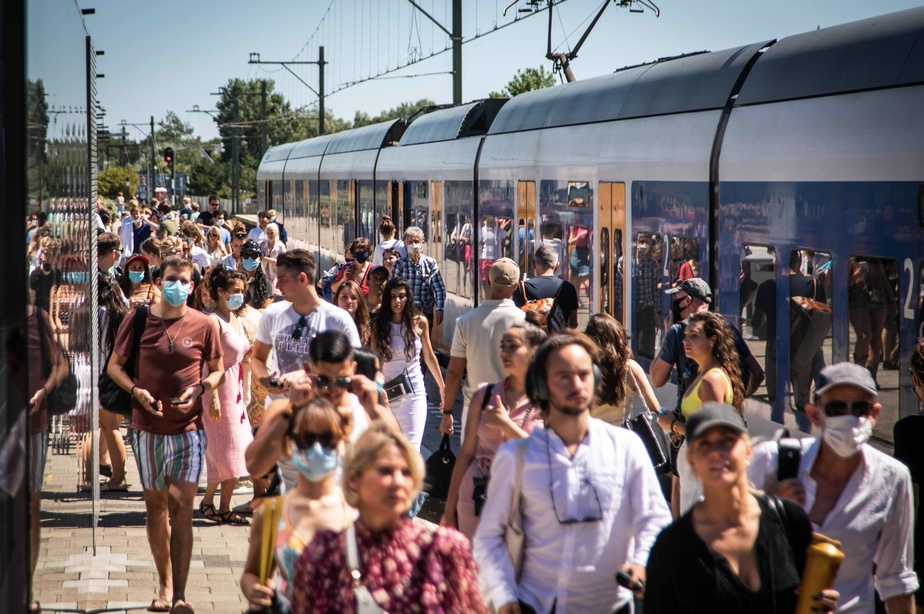 In the Netherlands, local authorities have warned people to avoid the resort town of Zandvoort, near Amsterdam, which is too crowded to allow physical distancing.

According to the train operator, trains to Zandvoort have been stormed by those seeking to escape the heat in the country.

“There are other quieter beaches on our coasts […] I advise you to look for them,” said the president of the regional security authority, Marianne Schuurmans, quoted by the Dutch media.

But in Lauwersoog (North), long queues of cyclists were also waiting at the pier for the ferry to Schiermonnikoog, one of the Dutch West Frisian islands, near the German border.

In Britain and Germany, weather services have announced that Friday is the hottest day of the year so far.

In Germany, public swimming pools which usually fill up at this time of year receive few people due to COVID restrictions – 14 (compulsory reservation of a time slot, maximum time allocated, cabins canceled, etc.). Consequently, rivers and lakes are becoming very popular and the authorities have had to remind them of the necessary respect for distances.

In the UK, summer weather has so far been disappointing and Brits in the southern regions – where the mercury crossed the 20 ° C, even exceeding 34 ° C in places in London – rushed to the coast. Photos of crowded beaches were posted on social media and in the morning passengers lined up to catch trains from London to Brighton, a seaside resort on the South Coast.

The heat wave will be short-lived according to the British Meteorological Service: temperatures, which have remained moderate in the northern regions, should drop sharply during the weekend in the south of the country and return to around a little over 20 ° C.

Europe wants to recover the spirit of 1945 against the pandemic

Messages of support for Boris Johnson

Federal officials fear Ghislaine Maxwell will take his own life