(Beirut) At 18 h 08 Tuesday in Beirut, a The crowd, in tears and anger, paid tribute to the victims of the explosion that devastated the Lebanese capital a week ago, and promised to bring down the entire ruling class.

The Hassan Diab government resigned on Monday. But in the streets, the Lebanese also want the departure of the head of state, the head of parliament, deputies, political parties … long accused of corruption and incompetence and held responsible for the tragedy through their negligence. “All means all”, they keep proclaiming.

For the fourth night in a row, clashes resumed between dozens of demonstrators and the police near the seat of Parliament in Beirut. Ten wounded were transferred to hospitals and 32 were treated on place, according to the Lebanese Red Cross.

TO 18 h 04 local, the church bells rang and calls to prayer in mosques have been made. It was at this time that the capital was shaken on August 4 by a gigantic explosion at the port of Beirut, caused by a fire in the warehouse where were stored according to the authorities 2750 tonnes of ammonium nitrate.

At least 59 dead, 6000 wounded, many missing and near 171 00 0 homeless. Entire districts of Beirut transformed into fields of ruins.

Since then, it is the population, especially young volunteers, who clears the rubble and helps the poorest and those in need, in the face of the inertia of the public authorities. Local and international NGOs have also mobilized to provide medical aid and food.

The resignation of the government further plunges the country into uncertainty but the protesters want all leaders to be held to account and to be judged.

“We will not mourn, we will not wear black before having buried power”, launched a speaker in front of the crowd of Lebanese, most dressed in white, gathered at the gates of the razed port by the explosion.

Some cry, others can hardly hold back their tears. A woman goes through the endless list of the names of the victims, which also scroll across a screen. 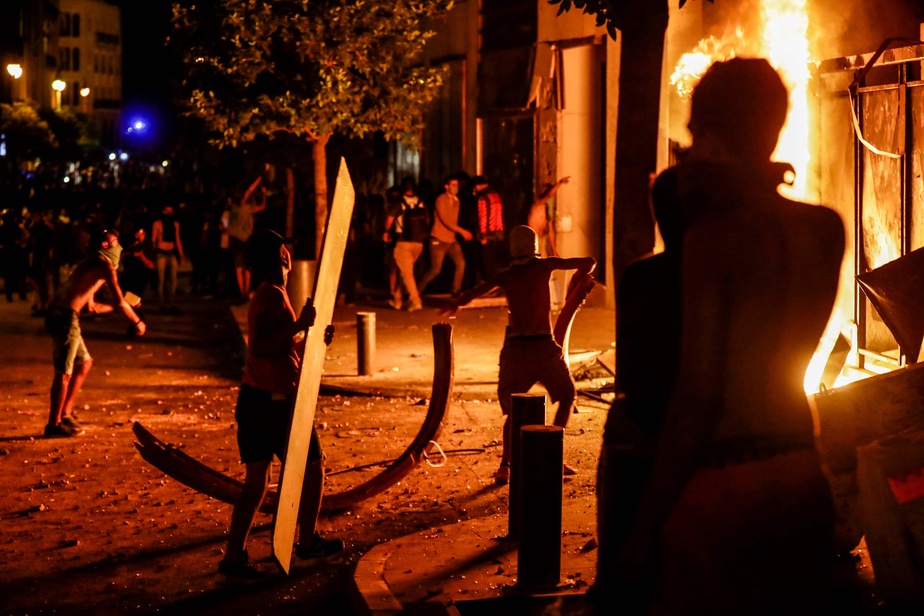 “My brother died because of the negligence of the State, because of corruption”, loose Ali Nourredine, holding the portrait of Ayman, 27 years old, a soldier who was at the port.

He does not care about the resignation of the government. “There will be a change when the whole regime changes,” he said, on the verge of tears.

A few km away, near the seat of Parliament, dozens of demonstrators tried to break down barricades, sometimes setting them on fire. Law enforcement responded with tear gas, like every night since Saturday.

A week after the tragedy, the authorities have not yet been able to explain why a large quantity of ammonium nitrate – a dangerous chemical substance – had been stored for six years at the port, in the middle of the city. Moreover, without “precautionary measures” of Hassan Diab’s own admission.

The local investigation is continuing, they say, after the arrest of around 20 people.

Among the dead in the explosion are 35 refugees according to the UN.

In October 2019, an unprecedented protest movement was born in Lebanon to denounce the slump economic and public services in decline and call for the departure of a political class almost unchanged for decades and accused of the ills of the country.

The explosion was too much disaster for a population overwhelmed by the historic depreciation of the Lebanese pound, hyperinflation and draconian banking restrictions.

To this is added the COVID epidemic – 18. A new daily record of contaminations – 300 cases and seven deaths-has been recorded in the latter 27 hours.

Honni, the Diab government announced in January, three months after the resignation of that of Saad Hariri under pressure from the street, was formed by a single camp, that of the Hezbollah movement, which dominates political life, and its allies.

Who will succeed Hassan Diab? The Prime Minister is appointed by President Michel Aoun, himself much maligned, on the basis of binding consultations with the parliamentary blocs of traditional political parties, also rejected by the streets.

It also remains to be seen whether the scale of the cataclysm will push for the rapid formation of a government, negotiations usually taking months.

Regardless, analysts are divided on a possible change.

Hilal Khachan believes the explosion could “be a game changer.” Jeffrey G. Karam, political scientist at the Lebanese American University in Beirut, judges, on the other hand, “almost impossible to consider and even to imagine that the explosion will sweep the political class in power”.

Thousands of Californians demonstrate against containment

A hurricane in full pandemic? Worst case scenario for Florida

COVID-19: major recession expected in Europe, Beijing closes the door to an investigation

Plane shot down in Iran: black boxes sent to France